Why Would a Wise Guy Steal the Wise Men?

Posted by Steve Wilson, Director of Child and Family Ministry on December 04, 2020 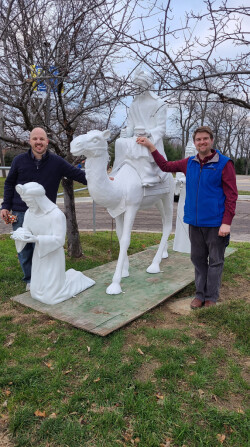 I have a confession to make. I know many of you will be shocked by this, but I am a thief. Every year around this time, I go around my house and take all the Wise Men. I also take them from church if I see them and they can be removed. You might be thinking, “How can you do this? Steve, why would you do such a thing?” Well, let me tell you it is something I have done for the last 25 years and it has a purpose.

Many people don’t know or don’t remember that at the Nativity the Wise Men weren’t there that night. In fact, they did not arrive until Jesus was at least a year old. (Matthew 2:1-12) The only people who visited the young couple that night were the shepherds - the lowly people who were outside of town in the fields, watching their sheep. The Magi were important, but they didn’t come until later. So why steal them?

Well, I actually don’t steal them. I just move them. I move them around my house or around the church. I do it for two reasons.  First, I want it to be more biblically accurate. Too often I think Christians may not fully know the story of Jesus. We take it for granted and teach our kids the wrong story. This can be a challenge for kids as they grow up, when they think they were lied to or tricked. Second and more importantly, the Wise Men came during Epiphany. The story of the Wise Men is about a group of people outside the promise of Abraham receiving the promise of Jesus. It is a story worth telling. We celebrate it in the Church 12 days after Christmas. So this year if you come to church and find the Wise Men missing, just know that I or someone else may be trying to teach a lesson.

(P.S. - This year at church, I convinced the pastors that I should be able to move the outside Wise Men around the campus before Epiphany. So if you are around St. John, drive by and see if you can find them. They will travel during all of Advent and make their way to the house on Epiphany.)